‘A hell of a warrior’ 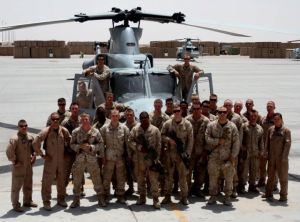 CAMP FOSTER, Okinawa — In the dim red light of an MV-22 Osprey, Sgt. Brady Cervantes, looked at Cpl. Brandon Moore, one of his team leaders, as the aircraft flew over southwest Afghanistan. The inside of any military rotary wing aircraft is too loud for voices to be heard, so Cervantes nudged Moore and mouthed, “You ready?”

Moore nodded and responded with a “rock on” sign. His actions over the next six days in Operation JAWS 5 would earn him a Bronze Star with “V” device for valor. Hospitalman Zack Penner, the team’s corpsman, would be awarded a Silver Star.

It was late June 2012 and Marines from 1st Battalion, 8th Marines and 1st Battalion, 7th Marines, had been tasked to support the operation, just weeks before they were scheduled to leave the country.

After landing at the compound in Helmand province, the Marines dug in. Moving in for a mission like theirs — clearing an area of IEDs and insurgents — involves setting up communications and establishing fighting positions around the walls.

As Cervantes, a squad leader with 1st Battalion, 8th Marines, was digging a “murder hole” in one wall. Lance Cpl. Eugene “Gino” Mills stood straight up on the wall, looking out into the distance.

“It’ll be a cold day in hell, Taliban,” Mills declared to the Afghan countryside. Mills was ready for a fight. Cervantes yelled at him to get down and they continued their normal preparations.

“We were getting reports that the main threat was IEDs,” Cervantes said. IEDs were the least of their problems. Enemy fighters continued taking shots at the Marines throughout the day on June 22, 2012.

Then Mills was shot. “We just saw him go down, drop to his hands and knees,” Cervantes said.

It was Mills who brought the team together to watch episodes of “Jersey Shore” on his portable DVD player every night.

Mills, who “could cheer everyone up without even trying,” Cervantes remembered.

Cervantes was quiet for a moment: “You never get used to seeing someone get hit, no matter how many times you see it.”

Hospitalman Zackery Penner, the team’s corpsman, rushed to the wounded Marine’s aid on an exposed rooftop, without his protective gear. Cervantes was outside the compound, coordinating Mills’ evacuation. Moore took control of the roof, leading his Marines to defend against the enemy fire.

Once the medical evacuation helicopter left, the fire died down, Cervantes said. The enemy had done enough damage for one day.

“But we still have five days here,” Cervantes recalled telling Moore. “We need to make sure that we keep them focused.”

Cervantes said later that he knew the Marines would be all right because Moore was with them.

The next day brought a new challenge: Cervantes was struck with dysentery and could not lead his team on patrol. Moore led the platoon.

Moore is soft-spoken, but was quieter than usual during his interview with Stars and Stripes. He didn’t look up as he talked about Operation JAWS 5. He didn’t want to talk about it.

They lost contact with their unnamed base about 500 meters into his patrol.

“It went downhill from there,” Moore said.

About an hour and a half into the patrol, Cervantes said he heard shots. Three snipers had started firing on the patrol.

“It’s not like you see in the movies, with everybody barking orders,” Moore said. “We had trained together and been together so much that everyone knew what the other one was going to do. As soon as it happened, we just jumped over the wall and started returning fire. I didn’t have to lead the squad. They did it on their own.”

This time, Lance Cpl. Hunter Hogan was hit, along with an Afghan soldier. Moore ran back to the compound to establish communication, then coordinated the evacuation of the wounded. With a working radio in hand, Moore returned to Penner, who was tending the critically injured men.

According to Penner’s Silver Star citation, he “unhesitatingly ran more than 100 meters across fire-swept terrain to reach the casualties. … When the squad began receiving fire from the rear, Penner courageously shielded the casualties from the enemy fire with his own body until the evacuation aircraft arrived and then bravely exposed himself to enemy fire as he moved the casualties to the aircraft.”

Cervantes said that he had bonded with Hogan — both Texas rodeo cowboys — when he first joined Hogan’s platoon. He had to go through Mills’ and Hogan’s gear at the end of the operation, collecting small personal items to return to their families.

The next day, Cervantes said he and Moore pledged to put an end to the losses. “We cleared that whole sector over the next three days,” Cervantes said. “We got into firefights. We did what we had to as grunts: close with and destroy the enemy.”

Moore’s Bronze Star citation credits him with coordinating Hogan’s emergency evacuation, while directing his squad to maneuver against the enemy. He “exposed himself to heavy enemy gunfire” repeatedly while he worked to get close-air support and an evacuation for Hogan, and to lead his squad.

“At first, I thought it was a joke. Someone just messing around with me,” he said, about how he found out he was nominated. “I didn’t do it on my own. The citation, summary of action, it always just says I did it. I was relaying everything. I wasn’t the only one out there.”

Cervantes described Moore as “one of the most humble guys I’ve ever met. He puts himself wherever he’s needed. … He’s a hell of a warrior.”

Though none of them want to take credit, Cervantes said the entire platoon — himself excluded, of course — deserved awards for their actions.

“Young men did a job that not many other people could do in their lives,” said Cervantes.

“I just remember how proud I was of them,” Moore said. “I didn’t do it alone.”

Talking about the operation brings out anger in both of them. They should have had more weapons and gear, they said. Cervantes wished he had been there when Hunter got shot. Others should have received medals, they said.

“Those guys are the ones who deserve the credit … the guys of 1st Platoon,” Cervantes said. “I will never take credit for that.”